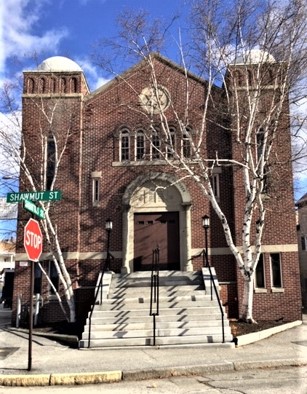 previous
Back to Latest Additions
next
Thank you to Elliott Epstein for the photo
Note: The 45-year span between the end of World War II and the close of the 1980s constituted a golden age for the Lewiston-Auburn-Jewish community, one marked by self-confidence, economic prosperity, high achievement, social connectivity and civic engagement with the larger community. For most of that period, Jewish religious and social life centered around the two L-A synagogues, Beth Jacob in Lewiston, built in 1925, and Beth Abraham in Auburn, built in 1934 (replacing an earlier building in New Auburn which had been destroyed by fire). Beth Jacob, which now houses a church, was located at the corner of Sabattus and Shawmut Streets. In 1951, a new Lewiston-Auburn Jewish Community Center further enriched Jewish life and helped unify the two congregations.
Related organizations:
Beth Jacob Synagogue;
Links to similar items:
tags