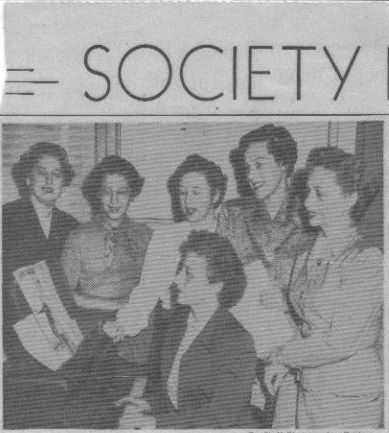 thanks to Steve Joachim for donating the image

Musical Skit To Be Presented At Center Women's Club Tea


Rehersing the the musical, On Revue to be presented Wednesday at the Center Women's Club, is a group from the cast including, left to right, Mrs Melvin Finn, Miss Linda Elowitch, Mrs. Jerry Lewis, Mrs Herman T Lewis and Mrs Yoland Potter. At the piano is Mrs. Albert Joachim

The Center Women's Club will open the fall season with a new members tea in the Little Theater of the Jewish Community Center at 1:30 pm Wednesday

A highlight of the afternoon's program will be presentation of a gay and lively musical skit, an orginal production, written by Mrs Sydney Levine and Mrs Simon J Levine, entitled "On Horn (?? :EDITOR)

Mrs Frank A Laben, past president, will acquaint the new members will all the activities and projects.